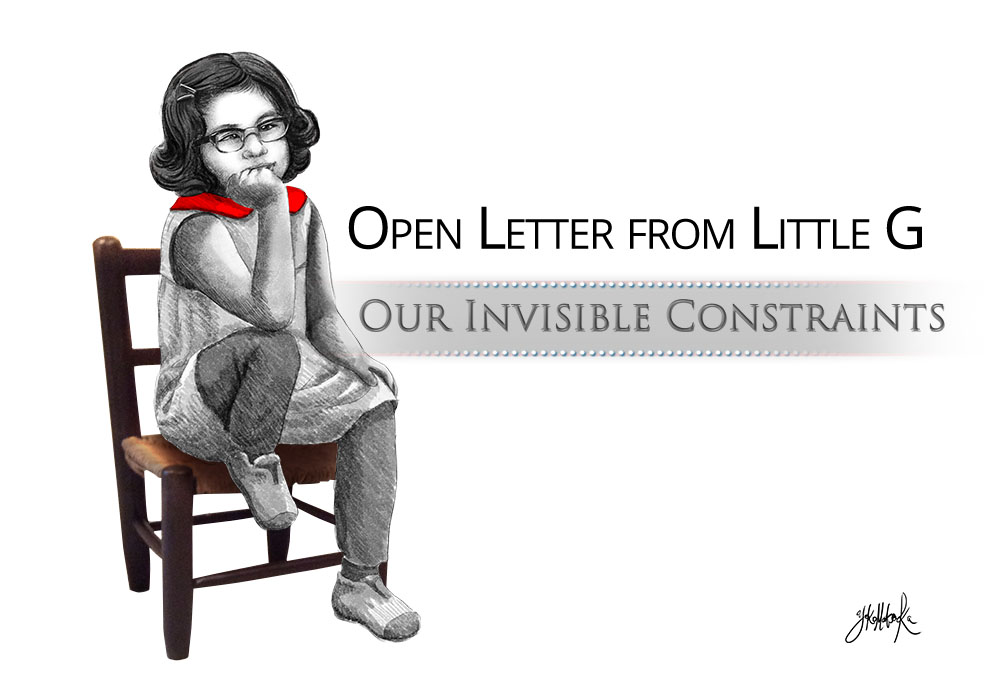 Words, words, words… all of these words are just opinions. I realize that today. But when you are young and vulnerable you have no idea what the words are or what they mean.

You are so lucky we adopted you = because now you are not a prostitute in the streets of Pakistan.

You should be grateful we adopted you = because your birth mother was too poor and uneducated to help and keep you.

The list is long and what is ridiculous is I truly thought it had faded, that somehow I had grown beyond it, but then I hear the negativity of family members. All it takes is just one word, a tone, a faint nuance, and that all-knowing look. It all comes flooding back: the pain of not being good enough, even though I logically know this is all BS.

What is missing in my mind is the heart… Where in any of these early words was there kindness or respect for the human being and compassion for little G? That is what makes me truly sad, nothing else, not the horrible words, really, but the fact they are so incredibly poignant, so direct, that it truly cuts like a knife, and I am apparently reduced to being only “lucky.”

I am not sure why I am writing this open letter, but if it can help heal the damage done, it will be a great relief. Like I said before, I thought the hurt truly had faded, I thought my armor had thickened enough. But since my father got ill and needed care, all the memories have flooded back. He was the one person in the family that I was not afraid of. He laughed the mean comments off and said to little G, “You cannot change people. You need to learn to compromise.” To me, this meant conforming, which I was not willing to do. He told me, “If you don’t, you will make your life very difficult as they will never see who you are.” Now, many decades later, I find he was right. I could not compromise. I call it stooping to their level.

Losing the last parent standing (in this case, barely standing) is hard enough. For me, it seems like I am closing a chapter that should have been tightly closed years ago. But as long as my adopted parents were alive, I kept the door open, somehow always hoping that there would be this magical conversation one day about our relationship about the love they might have had for me to bring it out in the open. Boy, that generation is tightly shut, no emotions, no nothing… they cannot do it. So, I did the only thing that I did have control over, which was to talk to them and ask them to listen, which they both dutifully did. Because, in the end, that is the only thing I can do: cleanse my heart and tell them that I loved and looked up to them for a very long time.

Like all children, looking up to your parents comes to a screeching halt when you go through puberty. You suddenly know that they are just like you; they have dreams and aspirations of a life that might have been very different from the one they are leading. They were once young, too. And I believe, when my father divorced my mother, her spirit was indefinitely broken. She was never able to mend. We unintentionally hurt others through our words, tone, and body language, and while doing this, we forget that we dis-include them from the group, we set them apart in such a way that they cannot find their way back into the fold. This is why I often refer to my childhood as looking in from the outside, even though I had a seat inside the structure, it sure never felt like that.

My mother died 12 years ago this November, and, like I mentioned, my father is very sick with Alzheimer’s and is in a special unit. You cannot have a regular conversation any longer. Like so many of my friends, we have reached the age where we are next in line, we are becoming the elders of the family line. I look back without regret, as I have said my piece.

I am thankful that I got to take care of my father one-on-one. No matter how hard that was, it was also bittersweet to give my love and devotion back to that man a thousand-fold and to see the joy in his face when I would walk into the room holding a bowl of chocolate mousse. I know you will think it was the mousse that made him smile, but just leave my illusion intact, please?

We unfortunately give these words meaning and a place in our lives. This is why I am writing, because I want to rid myself once and for all from all those early words that I have dragged invisibly behind me like a big ball on a chain, each link of the chain are words that have been said and etched in my memory. Like you see in the old cartoons of Tintin, the prisoner would have a ball and chain around an ankle. I am from time to time a co-host on Allen Cardoza’s radio show Answers for the Family on LA Talk Radio, and he recently had a guest that was talking about a documentary she had just finished on human trafficking. Somehow in the beginning of the show we were talking about how the world perceives that these girls are prostitutes and I told her that is how the world had perceived me as a toddler. And the guest, out of nowhere, said “This is how you might actually think of yourself too…” Phew, that left food for thought. This incident is how I knew I had to work on that as I have heard this too often explained to me even as an adult, but it does not make it easier to hear.

It is time to let go of every invisible constraint, some created by me and some not. With the work that lies ahead of me I must break free from my ball and chain. It is also time for the world to let go of prejudice and judgements about orphans that are born in underdeveloped countries and the Western perception that they would otherwise be “prostitutes” later in life. We need an attitude shift…

Indian and Mexican women are not all cleaning your hotel rooms or your houses, and female orphans around the world are not all made to become prostitutes and forced into sex labor.  It puts a stigma on this child at a very early age that they are only good enough for that. As if their mind and heart do not count. This is what is so sad about the Western world to me, is that we judge about these countries we actually do not know, and we adopt these children under the motto that we are helping them. Wrong everyone, you are filling your void! A thoughtful person would first consider what it is that they could bring to the child’s life.

For me, there will always be an ache to want to see the face, especially the eyes, of my biological mother and to hear her voice. Sometimes I dream that I heard her, a whisper so slight, but little G heard it. Maybe wishful thinking, but it helped to get through the terrifying moments of not being good enough. That my birth mother went through with carrying me 9 months, full-term, knowing full well she could not keep the child is pretty courageous in my books. She could have had an abortion and risked her life, but she chose life for me and for that I am grateful. In that context, I can actually say this word “grateful” that I abhorred in my youth and that I ignore in my adult life.

My insights on this matter over the years have actually never wavered: the poverty of the underdeveloped countries is big, this is true, however, the emotional poverty of the West is harder to stomach and live with.